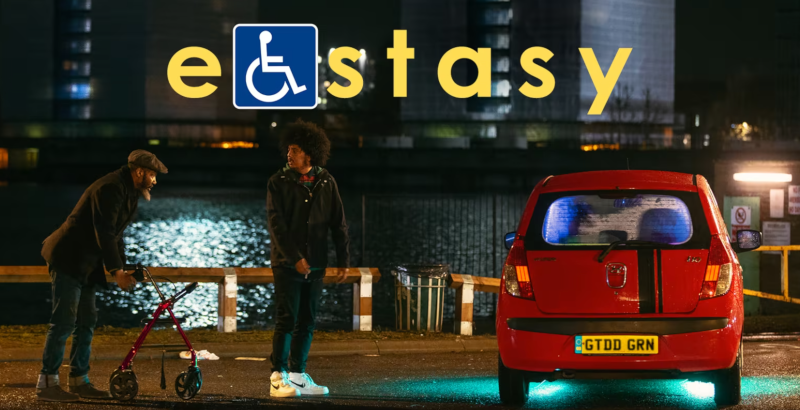 Bexley in Thamesmead, London SE2 comes into the spotlight with ‘Ecstasy’, a new short comedy film.

The story centres on a disabled father and his son’s crazy attempts to buy a single pill, so that the Dad can dance with his wife at her surprise birthday party … one last time. The madcap quest for a pill features Bazalgette Way, part of the FilmFixer borough of Bexley.

The crowd-funded short is based on the real-life revelation that ecstasy can temporarily alleviate the symptoms of Parkinson’s disease. It was inspired by writer-director Grant Taylor’s father Bob, who has lived with Parkinson’s for over 20 years.

Grant won a pitching competition at the Cine Circle Festival, which secured him a £1,000 contribution for kit hire. The team raised more than £4,500 in its first week of crowdfunding, and reached its original target in just 12 days, in one of the fastest campaigns the crowdfunding platform had ever seen.

This website uses cookies to improve your experience while you navigate through the website. Out of these, the cookies that are categorized as necessary are stored on your browser as they are essential for the working of basic functionalities of the website. We also use third-party cookies that help us analyze and understand how you use this website. These cookies will be stored in your browser only with your consent. You also have the option to opt-out of these cookies. But opting out of some of these cookies may affect your browsing experience.
Necessary Always Enabled
Necessary cookies are absolutely essential for the website to function properly. This category only includes cookies that ensures basic functionalities and security features of the website. These cookies do not store any personal information.
Non-necessary
Any cookies that may not be particularly necessary for the website to function and is used specifically to collect user personal data via analytics, ads, other embedded contents are termed as non-necessary cookies. It is mandatory to procure user consent prior to running these cookies on your website.
SAVE & ACCEPT