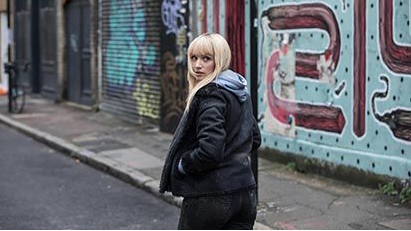 Series three of the hit Channel 4 sci-fi series Humans begins on Thursday. Once again FilmFixer boroughs were happy to help out. Take a look at the trailer.

FilmFixer CEO Karen Everett says, “This series takes a fresh turn, occurring in a Britain divided between synths and the humans. At the end of the last series, the synths achieved consciousness and things have not gone smoothly.

“The synth community itself is starting to fall apart, and some of the filming we supported saw this. The private location, the Peckham Liberal Club in Southwark, played an apartment where news reports about the unrest are causing concern and a synth called Agnes starts to panic inside her box.

“In this series the synth Niska, played by Emily Berrington, spends much of the time under cover. The Peckham Liberal Club was also used as a location where she heads inside a home and up to the loft to power down.

“It was Niska’s persuasiveness that led to the synths achieving consciousness in the last episode of series 2.

“Those scenes were filmed in November last year with 80 cast and crew.

“In September, 40 cast and crew were in Bexley to film a scene where two characters break into a car before heading off along Maidstone Road, North Cray Road, Edgington Way and Cray Road.

“We organised a two point road closure with a manual stop and go to make the break-in scene possible. We asked for strict controls so traffic could only be stopped for three minutes at a time and the production wasn’t allowed to cause traffic to back up.

“We deliberately permitted the filming on a quiet street, Powerscroft Road in Sidcup, which didn’t cause any problems to local traffic.

“Bexley residents are looking forward to seeing the small part their neighbourhood plays in the hit show.”

In her Channel 4 press package interview Emily Berrington said doing lots of scenes with William Hurt in the first series led her to researching AI.

She said Hurt was, “Just on another level of intelligence!… So I thought ‘Right, if we’re going to be able to have good conversations about AI, I need to go off and read some articles… I got particularly interested in the fact that the main problem with the development of AI is looking for genuine artificial consciousness’.”

Despite the politics examined in the show, Berrington isn’t sure her own campaigning qualifies her for a role in real politics, saying, “Good politicians have to have far thicker skins than actors do, and I don’t know, yet, if I have that. I definitely feel really passionate about specific causes, and that’s something I’ll stay totally involved with.”